I am always on the look out for a deal (like most people in this economic climate) so when Nottingham City Transport (NCT) started to offer a term based travel card for under 18’s that offers slightly better value than the 3 month card I took it up for my sons card. He uses his card for his journeys into NCN each day.

Towards the end of last term we got a flyer through the post from NCT indicating that they were doing a ‘spring term bus bargain’. It would be available in person or online from the 28th December 2013. Taking the offer up early gives a week or more of ‘free’ travel over the normal card – consequently it makes sense to do it.

However – the website address on the mailed out flyer doesn’t exist, it takes you to the page shown below. Also if you try to find the deal via the main website – you guessed  – it doesn’t exist! 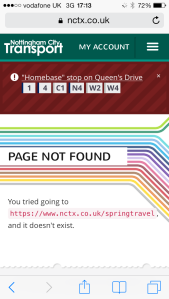 So we will keep trying over the next few days, but assuming the site doesn’t come live for a few days the majority of the ‘bargain’ is lost.

Call me cynical, but to me this looks like the Council offering something in the hope that it gets people to pay early for the basic 3 months card – which is more profitable for them. Obviously this is only a theory…….

This entry was posted in Nottingham and tagged Council, customer care, Customer service, Nottingham, Nottingham City Council, Social networking, when is a deal not a deal.