This week has seen the announcement of the three main winners of NESTA’s (National Endowment for Science Technology and the Arts)  Big Green Challenge. This has produced some interesting winners – all of whom receive £300,000 prize money to allow them to continue or expand their work.

With the recent issues over wind farms and pylons being positioned in the rural areas of the uk it is good to see one of the prize winners being ‘ The Green Valleys project’ in Wales’ Brecon Beacons that currently generates power from 10 mountain streams.

Normally hydro-power schemes rely on dams, but The Green Valleys Project uses micro-hydro, which involves diverting up to 50% of a stream’s flow into buried pipes which lead to camouflaged generators the size of a garden shed. The project is planning 40 more of such micro-power stations.

With extra help from energy advice surgeries, super-efficient vehicles and wood-burning stoves, 13 local communities in Brecon have cut carbon emissions by about 20% in a year, according to Nesta.

This is being achieved within a National Park and frankly with few people being aware of its existence. Consequently no one has complained, surely this small scale generation is the way forward in suitable areas? 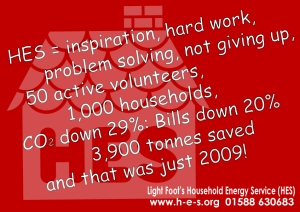 The second winner is the Household Energy Service – a volunteer run service based in Shropshire that helps  households  reduce carbon emissions, improve energy efficiency and save money on fuel bills. It manages this by providing free energy surveys (conducted by volunteers) that identify practical energy-saving measures along with estimates of the financial savings they could generate.

HES now covers four counties and has helped 15,000 homes so far, it is estimated that it has reduced emissions in these homes by an average of 10%. This is obviously small beer, but is an indication of what can be achieved – perhaps the Government should take note and start a similar national scheme?

The third and final winner is the the Isle of Eigg, where 38 families are working together in a bid to halve their carbon emissions. This initiative is being led by the Isle of Eigg Heritage Trust and involves a wide range of projects from installing insulation and solar panels to producing local food and developing low-carbon community transport. All the families are trying to live within a five kilowatt per household energy cap. The group has a blog which makes interesting reading!

Eigg are obviously trying to achieve something far more significant than most communities would be willing to attempt at this time. But there are undoubtably things to be learnt from their work. Another very worthy winner and perhaps a look at how we may be living in 20 years from an energy point of view?.

Over Christmas the Guardian did a piece on the CO2 emissions from the UK’s public buildings – I commented upon it here. Although a fair point was being made about the need to save energy, they had missed the point about the use of the buildings affecting the energy used.

Today in the Guardian there is a reply to the article by Philip Steadman, he confirms my comments but goes further due to the data that his team at UCL have collected about energy use in all buildings across the UK. They have established that industrial buildings use around 60,000 gigawatt-hours annually (for the buildings only and excluding industrial processes) against some 55,000 gigawatt-hours annually for schools, hospitals and offices put together.

What does this tell us? Not much in my opinion. Until we have a national database of all property and its energy efficiency it is almost impossible to gauge the real cost of the building stock of this country in energy terms. That will take a several years to carry out even with the help of the business community.

However, the Department of Energy and Climate Change is apparently producing a national database that will link floor areas to property use on domestic and non domestic property. The non domestic one is well-developed (no doubt due to the domestic EPC requirement being in place longer). Non domestic data collection has further to go, but this has to be a good idea that will hopefully prove useful in the future to allow a more accurate comparison between individual buildings.

This entry was posted in Energy and tagged 10:10, Emissions, Energy, EPC, Green, Power.

In the current economic climate it could be argued that as a nation we are as receptive to new ideas that may save money and the planet as at any time in the economic cycle (what ever that is now).

There have been two Government announcements this week relating to the supply and generation of power for the UK. These announcements have provoked a variety of responses, many of them sadly only too predictable.

The first announcement related to the construction of 137 miles of new power lines across Scotland, my colleague blogged about this yesterday and was somewhat ‘in line’ with the current attitude to this type of thing in the UK – Not in my backyard!

I am not surprised by this attitude, as a nation we seem to have lost any personal drive for the national common good. Britain experienced massive growth in Victorian times – partly due to the industrial revolution but also due to the ability for things to happen – how many years did it take to get the high-speed rail link agreed through Kent? I am sure it would have happened quicker in the 1900’s!

We seem to be alone in the World in trying to stop this type of development at every turn. Drive across Europe or the USA (California especially) and you will see large wind farms producing very cheap energy. Personally I don’t have an issue with their appearance, but I am a country lad more used to making the land provide, rather than a towny who just wants it to look pretty!

We are going to have a major power issue in this country within our lifetime, forget global warming (I know you want to) – we need alternative power sources because fossil fuels will run out! As a nation we are at the forefront of alternative energy, we need to develop this expertise, the alternative is Nuclear! Do we want that?

The announcement today relates to the successful bidders for 9 new wind farm sites located off shore around the UK.

Turbines in the nine zones could generate up to 32 gigawatts of power, a quarter of the UK’s electricity needs.

Lets hope that these receive a slightly more positive reaction from the public (no back yards out there!)

This entry was posted in Energy and tagged Emissions, Energy, Green, Power, Wind.

The Government have today launched the Boiler Scrappage scheme that they

first announced in the pre-Budget report before Christmas. The scheme is seen as a positive move on two fronts;

It should help to keep the relevant sectors of the economy at least ‘ticking over’ (in a similar way to the car scrappage scheme).

It’s good for the environment and your pocket!

According to the government the scheme should also help households cut their energy bills, as well as  reduce CO2 emissions.

Up to 125,000 households in England could benefit from the scheme, which is costing the government £50m. To be eligible people must own their homes or alternatively landlords who rent homes are eligible.  Social landlords, housing associations and boiler installers are not.

There are about currently around 3.5 million homes in England with the least efficient types of boilers. These are rated ‘G’ by the Government and generally include units with permanent pilot lights and over 15 years old. Oil fired units are also potentially eligible if older that 25 years.

A new boiler can save around £200 a year on an average house heating bill so this initiative should be attractive to people. It also seems likely that some of the larger suppliers may add their own discounts to attract business which can only be a good thing!

Time will tell how this will progress, but hopefully it is another step forward in reducing our emissions and our energy costs.

This entry was posted in General and tagged Boiler scrappage, Emissions, Energy, Green.

I have to admit to being made aware of this excellent Government backed campaign by one of my colleagues via his blog. He is a fairly sceptical person when it comes to the global warming issue, so it was something of a surprise to see his blog (and slightly embarrassing for me as the firms energy assessor!)!

I believe that this suggests that the 10:10 campaign may well be the best thought out so far by the UK’s Government. With the start of the new year and the current economic climate I believe it may well become a “popular cause”. We have already seen the power of social networking in pushing popular causes – Rage Against The Machine being the most recent.

I have also previously blogged to the effect that I believe people need to see a benefit to acting on green issues. This campaign is aimed at showing how a 10% cut can also save us money, saving the planet is a “by-product”. This I think will make it much more acceptable to the public. The downloadable checklist is an excellent idea which will engage kids as well to the cause.

So if everyone can blog, Twitter and promote 10:10 we may be able to make an impact.

The company I work for has registered, as have I, how about you?

This entry was posted in Energy and tagged 10:10, Emissions, Energy, Green.

Motor racing is generally viewed by the green movement as something extremely bad for the environment. Making cars go as fast as possible by burning fossil fuels must be bad – right? No – I would argue that the research and development adds a great deal to the cars the “greens” would like us all to drive.

A recent BBC headline highlighted this for me;

Formula 1 bosses are to investigate ways of promoting the advance of environmentally friendly technology.

Now I believe we already have a lot to thank motor sport for in our cars – certainly it has already made them far safer to be in and to drive. Anti lock brakes, traction control are just two high-profile technologies to come from motor racing. Also the desire to extract the last ounce of power from an engine also provides manufacturers with the ability to make ordinary car engines far more efficient. Aerodynamics is another major feature of both racing cars and modern family cars.

More recently in F1 the ‘Kers’ system was used – basically this recovered waste energy from braking for use as extra power via an electric motor later on in the lap. The F1 teams found it expensive in weight terms, but it is now being used in our road cars to differing degrees;

The Toyota Prius is the best example, using regenerative braking all the time to boost its battery which is then used to drive the car. However, Audi, BMW and others have already added a similar feature on their ordinary cars to charge the cars battery – there by reducing the need for a full-time engine driven alternator – clever!

Jean Todt the new head of F1 should be applauded for trying to do more. Perhaps we will see one of the teams embracing more ‘green features’ as a way of attracting a new breed of sponsorship?

This entry was posted in Tech and tagged Energy, Green.