Last night Rushcliffe Borough Council approved in principle Sainsbury’s planning application for their new store on Wilford Lane. To be honest there was little doubt that it would be approved – sadly that is the way of things. However, will it actually benefit anyone other than Sainsbury’s?

I am not a fan of the supermarkets, I believe they have a lot to answer for – and have certainly helped our high streets to the sad state that they are now in. My home town of Malmesbury is currently a few months behind West Bridgford in this process – I can only hope that it doesn’t go the same way.

Sainsbury’s have stated that they believe the store will give more choice to West Bridgford shoppers (which it will), but it must have a negative effect on the town centre shops, so how can it be good for the town? Their official line?;

Sainsbury’s predicts the supermarket will benefit the economy and “complement” the smaller shops 1.25 miles (2km) away in the centre of West Bridgford.

West Bridgford is a very healthy suburb from a retailing point of view at the moment. Rents are strong and vacancies are minimal. Morrisons and Asda cover the town on either side and M&S simply food in the centre works well. Sainsbury’s just doesn’t sit well in this – especially when the Castle Marina store is less than 2 miles away as the crow flies!

So no, I don’t agree with the decision and hope that the Secretary of State kicks it out – sadly I don’t hold out much hope of this though!

We live in one of the UK’s most desirable locations.

I am catching up on a few items I came across during the Christmas break that I thought were quite interesting – one of those related to recent research on the most ‘desirable’ places to live in the UK. The research by the Halifax bank was based upon the following criteria;

Rushcliffe is the area I am lucky enough to live in, but perhaps of more note is the fact that it is situated (and abuts) the City of Nottingham which is always being dragged down by the national media claiming that it has a high crime rate and is a terrible place to live (which it isn’t). Perhaps the BBC and the like should pay more attention to data such as this and amend their stories accordingly?

No doubt they won’t but again we have evidence that the East Midlands is a great place to live and work!

Harsh words – but well earnt in my opinion! Fly tipping has apparently reduced since 2010 according to recently released figures. But as far as I am concerned as a country lad, any is too much.

Local authorities in England have reported that they had dealt with nearly 820,000 incidents of fly tipping in 2011, with 63 percent of these incidents classified as ‘household waste’. This represents a drop of 13 percent since 2010, allegedly since local authorities have increased their enforcement of prosecutions for fly tipping incidents – although more on that later.

In 2011, there were 2,409 prosecutions of waste offenders by local authorities, with 96 percent of these resulting in conviction; most often resulting in a fine. Now on the face of it that sounds quite impressive until you look at the figures more closely;

Fly tipping is totally unacceptable – most comes from either a lack of respect for the environment or basic financial greed! If people managed considered their waste disposal properly and didn’t use the ‘bargain clearance services’ offered by the wide boys we would not have this issue.

Looking at my local area (Rushcliffe) it is clear to see this is a problem in rural council areas, 729 incidents, but only one prosecution – so the detection rate is also not great!

We need better enforcement – prison sentences not fines, and confiscation of vehicles etc. Let’s stamp out this problem once and for all!

Recycling rates and the East Midlands

As a family we have been trying to improve on our recycling rates over the last 12 months – this was partly enforced by missing the collection of our grey bin one week – entailing a one month period of no rubbish collection at home! We found over this period that we could actually put a lot of our ‘normal waste’ into the blue recycling bin. Subsequent two-week periods have seen our blue bin full, and our grey bin not overflowing anymore.

However, it would be good to know how we compare to other areas of the UK on recycling – and this information is now available, but the results vary greatly depending on where you live. The good news according to the latest data from Defra is that English household recycling rates are at a record high – at 40% of household rubbish.

The figures show that the average recycling rate for English councils was 41.2% between April 2010 and March 2011, up from 39.7% the year before. Recycling rates have been nudging up annually in the past decade but the rate of progress had begun to slow since 2008, a trend that continued last year.

But it also shows that recycling is not at the same rate around the country – it’s stronger in some boroughs than others. In Rushcliffe we are recycling 54% (up from 53% last year) which is up in the top 25% for the country – so another pat on the back for Nottinghamshire residents. 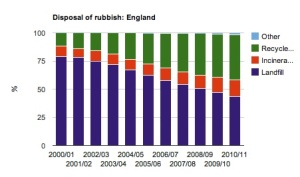 The top and bottom recyclers?

Ashford borough council came bottom of the rankings with a rate of just 14%!

Interestingly, as a country we are also producing less rubbish than ever before – around 449 kg per person per year. But, good as those figures are, we’re still worse than other countries, with 404 kg being the European average.

Being new years day yesterday I was out early collecting a teenager from a party. It was quite apparent that the roads were
very quiet (as they had been on New Years Eve).

That’s good I thought, it shows most people are staying out of their cars – perhaps the drink driving message is finally getting through !

Imagine my horror therefore, to find as I drove back through West Bridgford at around 9.30am the Traffic Wardens ticketing cars like their lives depended upon it!

I am assuming their ‘victims’ were New Year revellers who had wisely left their cars overnight and used public transport or taxis to get home – excellent and socially responsible behaviour! They may also (quite understandably) have believed that New Years day was a Bank Holiday and that therefore the parking charges did not relate to their parking.

Obviously it was not a Bank holiday (as it was a Saturday) and the Traffic Wardens were fully aware of this! But surely this is not the action of a socially responsible Council? We are all quite rightly responsible for our actions, and drink driving is one of the worst offences. But what message does Rushcliffe Borough Council send out to its residents by booking them on New Years Day!

How many of these drivers will be tempted to risk drink driving next year? Surely to offer free parking till say 12 noon would have been a good thing – or would that have cost Rushcliffe too much?