The wonder of fibre…

I have been a long term user of the Virgin fibre network in Nottingham (originally NTL), for both my TV and internet. It is fair to say that until recently their service has been brilliant, with downtime counted in hours over many years.

Sadly over the last few weeks there have been some issues – the majority national ones caused by DNS server issues – something that could happen to any provider but extremely annoying! Add to this the recent underground fire that completely took out much of South Notts as far as Virgin was concerned for days and you get the picture – I was ready to call the retention department at Virgin to vent my frustrations.

So the other day I rang, was offered some deals to stay by the ‘normal’ call centre, but was then passed to retention and got a monthly reduction and a speed increase to 152mb for my broadband.

Now you read about fast connections and how quickly things download at this connection speed – but when you actually experience 152mbps it is really impressive! And my connection currently is slightly faster than that as you can see above! Very large downloads (GB’s) take a few minutes rather than half an hour or more. I am impressed and as long as the recent DNS issues are a thing of the past I will continue to praise Virgin Broadband.

Social Media – the importance of a good data connection…

There are certain things in life that we take for granted – the sun rising in the morning and setting at night, England disappointing us at football – you get the idea. And as the world changes our expectations change also, who would have imagined 10 years ago that we would all expect to be able to access mobile data where ever we are to interact with social media (and collect email etc).

The smart phone has become an essential part of so many people’s lives now and we expect it to work all of the time 100% effectively. Apple, Samsung and Microsoft have done their best to facilitate this with their hardware and software – all of which still never ceases to amaze me with what it can do. However there is a weak link in all this…… and that is the networks.

You can have the best bit of hardware in the world, but if you can’t get mobile data it is about as much use as a brick! My experience at the Test Match at Trent Bridge this week was a classic example. I was intending to twitter via the @InnesEngland twitter account from the match, and I did, but not to the degree I wanted to due to a lack of 3G signal from our carrier Vodafone. I know it wasn’t just me because my colleagues were having similar issues with data as well.

This is not a new phenomenon brought about by the increased use of mobile data, I have found Vodafone wanting on their coverage for many years. They have made some minor improvements, I actually got 3G in my home town of Malmesbury recently for the first time ever. But generally they lag well behind the other networks EE and in particular.

There was a time when the enterprise user was the most important user to a networks data provision, that may still be the case but for different reasons as Social Media usage explodes into that market. Perhaps it is time for the various networks to share their masts and provide the sort of service the rest of Europe already experiences.

Never underestimate the power of the web….

I have a client who makes coffins – this sounds rather morbid and unexciting, but as well as ‘normal’ coffins they make bespoke coffins as well. This side of the business trades as ‘Crazy Coffins‘ – and what they produce are quite amazing.

It is as you can imagine quite a niche business, but once people hear of it they tell others about it, so growth is somewhat organic. However they do have a Facebook page and put up photos and information about their special coffins. The number of likes on the page were at around 700 a few weeks ago, and then they had some ‘internet luck’….

A lady who lived in Aylesbury wanted a casket for her ashes in the form of the Star Ship Enterprise from Star Trek (she was a Trekkie). The details and photos were duly added to the Facebook page once completed on the 8th December, and then some internet growth occurred…

Within a day the likes on the Facebook page had doubled, mainly due to a US undertaker who liked the page, his like was then seen by George Takei (Mr Sulu from Star Trek) who has 5 Million followers on Facebook (he is also on Twitter @GeorgeTakei) – the photo then gained 40,000 likes.

Scary, or just our changing World?

I saw a report last week that said that ‘half of teenagers have never sent a letter’ – this set me thinking about the way we relate to each other nowadays.

The stats on letter writing really were quite salutary – apparently half of 12 to 17 year olds have never sent a personal letter to family or friends, and many claim they wouldn’t know how to! This is obviously good news for those who have taken up shares in our recently privatised Royal Mail…..

Two in five girls and three in five boys admitted to never having used the traditional post in their lives, with the majority not seeing why they should when they can send an email instead. Even adults have changed with one in three unable to recall when they sent a personal letter last.

So email is the new letter – 93% of teenagers and 55% of adults confirming this was their preferred choice for ‘written’ contact now with family and friend. But perhaps even more damming is the reason given by almost a quarter of the respondents – cost and time taken to deliver the letter.

We live in a much more ‘instant’ society now, the smartphone has become almost essential to be an active part of society – 2013 will without doubt be seen as the year we all went mobile.

I love tech and how it can help smooth the experience of running your life, the iPhone (or any smartphone) is an amazing piece of kit that can help you keep on top of things. I have run my life for years via one piece of kit – initially a Psion, then a Pocket PC and now an iPhone. There is an issue however that is becoming more off an issue as more and more people and businesses become ‘tech savvy’. And that is information overload – something that allows you to screen the information coming through your smartphone would be great (and prevent constant checking of the phone).

I think I may have found the answer – but do I adopt now or do I wait for Apples take on this technology? I am of course talking about ‘smart watches’ – Apple are believed to have the iWatch in the wings (release is currently ‘expected’ in fall 2014). But there is a current option – the Pebble – it isn’t as flashy as Samsung’s Galaxy Gear, but it also doesn’t cost an arm and a leg!

The Pebble only has a black and white screen, but it does offer up to 7 days battery life and will link with an iPhone (running iOS7) and show all notifications of emails, texts, Facebook, twitter – you get the idea. It is this which interests me – the ability to screen out the many notifications with only a flick of the wrist.

Yes, it does perhaps currently lack the depth of abilities to make it a real ‘killer’ item, but it is constantly being updated via its software and has huge potential. In many ways it is a classic case of ‘more is less’ and almost has the feel of ‘Apple’ to it.

Twitter has become an integral part of our society, it seems that there are a huge number of users who have signed up – quite a few people I know are ‘watchers’ rather than active tweeters. Certainly at work we have an active account and I know many of my colleagues regularly use it to publicise deals or events. In the correct hands it can be quite effective. 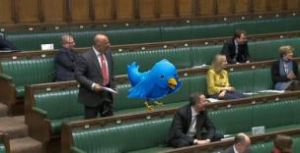 However, as with anything that has such a massive readership you need to keep an eye on what you tweet – and in responding you need to be accurate and understand the original tweet…..

So I couldn’t help smiling when I saw the news about David Lammy, the MP for Tottenham who was outraged by the BBC’s ‘racist headline’ about the smoke from the Vatican’s chimney being black or white. He was in the House of commons and misread the original headline…….

I did think his subsequent tweet when he realised his mistake was spot on as well however.

This highlights two things – firstly you should think before you tweet and secondly MP’s shouldn’t tweet in the commons!

This is an interesting question – should the fire services take emergency calls (currently 999) via social media sites like Twitter? Last week the London Fire Brigade said it was considering such a move, allowing people to tweet emergencies instead of dialling 999.

Previously it has advised against using social media to make the service aware of fires as it is not monitored 24 hours a day. But it has acknowledged that the increasing proliferation of smart phones means they might actually get a swifter response.

First introduced in the London area on 30 June 1937, the UK’s 999 number is the world’s oldest emergency call service. The system was introduced following a fire on 10 November 1935 in a house on Wimpole Street in which five women were killed. A neighbour had tried to telephone the fire brigade and was so outraged at being held in a queue by the Welbeck telephone exchange that he wrote a letter to the editor of The Times, which prompted a government inquiry (even in those days).

In recent large fires in London the fire service have actually asked via twitter and other social media sites for local reports, photos and videos of fires to help them judge their initial response, and apparently it has enabled them to deal with incidents more effectively. So perhaps this is the way forward?

After all, when 999 calls were first introduced to summon assistance everyone apparently said it would never work!