I was known in the office at one time as ‘Dr Doom’ – I had a rather negative approach to things apparently! That was a while ago and hopefully my outlook has changed in recent years….

There is one thing that still concerns me though – I do seem to find myself complaining rather a lot when dealing with people in this country. This has made me question myself – is it me or is service and customer care something that is sadly lacking in the UK now or do I expect too much of people? 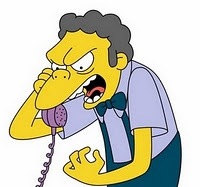 My recent run in with the Royal Mail is a classic case – I eventually got to speak to a manager, who to be fair was polite and tried to be helpful. His intervention didn’t produce my lost package, but at least he tried. I did have to chase him a couple of times, and he didn’t return calls that he had promised to do (not good in my books) – but he was at least helpful and polite.

Contrast that with the staff below him who were the day to day face of the sorting office – they really got quite defensive and in some cases abrupt and rude when challenged about a lost package. They obviously had no idea about how to deal with an issue – and the end feeling they gave was one of just not caring about their customers!

Now, that may or may not be the case – they would no doubt blame ‘the management’ and probably visa versa (that is a British disease) – but why do so many people in this country have no pride or interest in their work or company?

When I was a kid my parents always used to say that ‘good manners cost nothing’ – it annoyed me as a child, but how right they were. I know I have been ‘banging on’ recently about the USA and the way they treat customers, but we really do need to look closely at ourselves as a country – we really don’t come over as very nice people in my view!

One of the things (there are many) which has struck me over the last two weeks while in America is how they have improved both their mobile phone networks and their wifi availability. It was not so long ago that Europe was way ahead of the USA in terms of mobile data and speeds of networks. However, I have seen 4G on my iPhone more often than not in both New York and Florida, and it has never dropped below 3G coverage.

Now I am aware from my travels in Europe that in the UK we don’t do as well for coverage as most European countries (and certainly not as well as the mobile networks lead us to believe). But I did not expect such amazing coverage in America.

To add to this however – and to really highlight the difference with the UK is the availability of free wifi – it is literally everywhere. In New York most large stores offer it for their customers, plus there are areas in certain parks that have free wifi also – it is therefore almost impossible to not have a good signal. But more importantly as a traveller it reduces your data roaming costs hugely!

And Florida is a similar story – restaurants, shops, malls, even Disney offer free wifi! They obviously ‘get it’ – providing free internet access makes the whole experience better for all involved (especially the males who are following their wives around!).

So the next time you hear the Government telling you we are well provided for with broadband speed and access, don’t believe them. We are years behind!

A reflection on customer service

The events of the last two weeks have set me wondering if we actually have any interest in our customers in the UK? My torrid experiences with Virgin can’t be the norm surely?

This has set me thinking and looking in my everyday life for examples of good customer care – going the extra yard for your client perhaps, or just being pleasant and thoughtful in the world of business. One of the things that people often complain about with Americans is that they are always so ‘insincere’ when they deal with you. I don’t agree, at least they are friendly and keen to help, it always strikes me that whatever their job they do it to their best and take pride – is this something lacking in the UK?

My experience with Virgin left me feeling somewhat ‘grubby’, they tried to make me feel guilty for chasing them – they were doing their best apparently (and it is quite likely they were) so I should wait. They were very good at saying sorry, to the point that it became meaningless. What ever happened to the client comes first? Call them to let them know what is going on – even if you don’t have any real news. The client will be grateful for the contact because it shows you are on the case – and dare I say, you are interested and care!

I am currently in Dublin, this is my first visit to Ireland and it is interesting to compare what is their capital city and its friendliness with London – is there any comparison? No!

Since arriving I have found the Irish to be very warm and friendly, they are keen to help and provide just that little bit extra. Not something that would be common in London! Do we perhaps still have a ‘bit of a chip on our shoulders’ as a race? We do still like to think we run the world – we don’t!

Perhaps just a bit of good old-fashioned humility and consideration would go a long way in the UK?

Black Friday – a good US import?

Yesterday was ‘Black Friday’ in the USA – it sounds bad but is actually a good thing from a retail point of view! Thursday was Thanksgiving for Americans – possibly a bigger ‘holiday’ than Christmas to the average American, and a time when most US families try to get together – a good thing.

For years now US retailers have made the day following Thanksgiving a special day for shoppers, they have a one day pre-Christmas sale. I have to be honest that I have no idea why it’s called Black Friday (the black bit – not the Friday), but it is a great way to kick off the Christmas purchasing conveyor.

The concept is now starting to shuffle its way into the UK – large companies like Apple and Amazon are offering similar deals in the UK on Black Friday as they offer in the US. For example around 10% off many Apple items – so a 32GB iPad for the normal price of a 16GB unit – you get the idea.

Some smaller on-line companies have also caught onto this – possibly because they deal in the USA as well as Europe, but I would like to think that they realise that everyone likes a bargain, but that any sale, even one at a reduced margin has to be good.

The January Sales concept is rather ‘tired’ in my view. People are slowly catching onto the fact that much of what our retailers offer in the January events is specially produced or brought in for that purpose – so is not actually a bargain!

A late November dose of ‘retail therapy’ might also kick-start Christmas for UK retailers – I believe it does have this effect in the US. So how about it, should we adopt Black Friday in the UK?

When the subject of saving energy is discussed, the one thing that is guaranteed to start an ‘animated’ discussion is the ‘loss’ of the tungsten or incandescent bulb. The Daily Mail (bless them) decided that they could sell lots more papers if they championed the cause – namely stopping the Government ‘forcing us’ to use CFL’s (low energy bulbs to you and me). They even gave away lots of old tungsten bulbs to their readers and really stirred up a lot of misinformation (so unlike them!).

The truth is the cost of CFL’s has dropped greatly in recent years, and the quality and performance from cold has improved until now they really do provide a good level of illumination – and despite what the Daily Mail will tell you, they do save a lot of energy!

As an energy assessor I can demonstrate this by changing the lighting in an EPC calculation from all CFL’s to all tungsten bulbs – this can change the rating by two or more levels – so for example from a respectable B to a lowly D!

So the news this week that China has committed to move from tungsten to CFL’s is great news.

This commitment by the “world’s workshop” to end the manufacture and use of wasteful incandescent light bulbs cannot be under estimated. While switching to CFL’s  (75% more efficient than incandescents) has become unremarkable in some developed nations, the significance of China’s move should not be underestimated. Almost 20% of global electricity is used for lighting and the pollution it causes is equivalent to half of all the cars on the world’s roads.

With China starting to churn out billions of efficient bulbs, costs will fall further. That means it will be possible to cut carbon emissions from lighting around the world – perhaps by as much as half. Even more important when much of the third world is yet to realise electric lighting to much of its population, but should now hopefully develop with CFL’s.

Lighting is an easy and cheap way of reducing energy use across the world without recourse to ‘flashy’ green technology, and this decision by China shows them to be more in touch with energy use in this respect than the USA – at last some (minor) positive news from the far East.

Sometimes a photo says it all…….

This entry was posted in General and tagged 10 years on, 9/11, USA, World Trade Centre.

Finally a UK export to the USA!

It’s not often that the US adopts something that is in common use in the UK – they normally consider their way is the best! But the fastest growing change in traffic layout in the US is based on a UK invention – the roundabout.

Anyone who has driven in the USA will know that they just ‘don’t do’ roundabouts. The traffic light and crossroad is king, together with various rules allowing turns on red lights (sounds scary but it works).

The first roundabout arrived in the US in 1990 and about 3,000 have sprung up since.

The Mayor of Carmel, Jim Brainard, has become America’s evangelist on the matter, demolishing 78 sets of traffic lights and replacing them with roundabouts.

It’s a trend now – there are more and more roundabouts being built every day because of the expense saved and more importantly the safety.

A study by the Insurance Institute for Highway Safety suggests there is on average a 40% decrease in all accidents and a 90% drop in fatal ones when a traffic intersection is replaced by a roundabout. Also the long-term financial saving is about £150,000 due to reduced maintenance costs.

There are also fuel savings, not just from cars that aren’t idling at traffic lights, but starting from a dead stop takes up more fuel also, so they are potentially saving thousands of gallons of fuel per roundabout per year.

Obviously big US cities built on a grid system will not change, but more suburban and rural areas may start to appear more ‘normal’ to UK travellers soon!